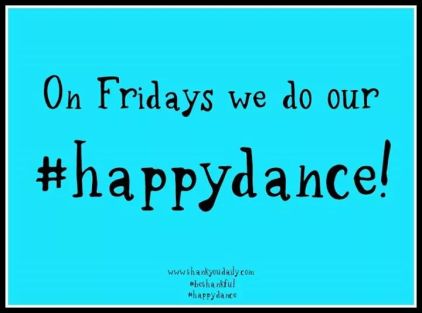 About a month or so ago, I started “On Fridays, we do our happy dance!” It’s a day to be happy about whatever. I’m usually most happy that I made it through another week and today is no exception, although it is a bit different.

Normally, I have a soundtrack for my happy dance that plays in my head. I might not actually bust a move (Do people still say that?), but it does put a little spring in my step and a smile on my face. Last week, I was so excited about my boots that I kept hearing Nancy Sinatra’s anthem all day long. One of my standard happy dance, I-know-I’m-hot-stuff songs is “Stayin’ Alive” by the BeeGees. I’ve never seen “Saturday Night Fever”, but I have seen some of the more iconic scenes, so when I’m bopping to the beat in my head, I normally have a little strut in my walk just like Travolta.

Before I got to work today, I heard two of my favorite happy dance songs, “Happy” by Pharrell Williams and “Don’t Stop ‘Til You Get Enough” by Michael Jackson. Those songs usually get my blood flowing and produce a little happy wiggle or at least a loud exclamation of “Woo!” with MJ when the beat drops. Today, nothing. I’m dragging today and apparently I need something more powerful that Pharrell or MJ to get me going.

So tell me, what is the soundtrack that plays in your head when you break out into your best happy dance?

I have to tell y’all what’s had me doing my happy dance today. It’s really not that big of a deal, and it probably is a true indication that I’m getting older, but it made me so excited, I actually did a little jig as I exited the store.

In the late 90’s, my stepmom bought me a pair of tall boots. I didn’t wear them very often initially because I thought they made my legs look like twigs. When I did wear them, it was always under a long skirt so that you couldn’t see how small my legs were in comparison to the opening in the boot.

At some point in time, I stopped worrying about that and started wearing the boots much more often. In the past seven years, they have become a staple of my wardrobe.

Last year, I thought that it might be time to retire them because the heels were looking a bit rough. I took them to a local cobbler and he fixed them up enough to get me through the season. When I walked into the cobbler’s shop last week, I went with a shy, sheepish look on my face, with my head held a little low. I asked him if he could put new heels on my boots. He quickly said no, but he would do what he could to get me through another season. In the back of my mind, I knew I was asking a lot of this man so I started to figure out how I was going to afford a new pair of boots. I even went out looking for a pair, but to no avail. There was no other boot out there that was as perfect for me as this boot. The height was perfect. The heel was perfect. The fit was (finally) perfect. Nothing else compared to my 15+ year old boots and I wasn’t ready to let go of them quite yet.

Today, when I walked in the shop, I went in expecting a miracle, and I saw the shop in a completely different way. There were shoes strewn everywhere; all waiting for their turn at redemption. The walls and floor were the same green as surgical scrubs. Bits of leather covered the countertop next to one of the cobbler’s tools. As I searched for my claim ticket, I noticed talk radio blaring in the background and I paused to hear that some locality in South Carolina had charged some officers for the killing of black men. The cobbler took pity on me and started showing me boots and asking if they were mine. I found my ticket at the same time as he showed me my boots. When I looked up, it was as if an angelic glow surround him and my boots. I couldn’t believe how great they looked. Unless you were closely inspecting them, you would have no idea that they weren’t new.

“How much do I owe you?” I said with the grin of a Cheshire cat.

And then he smiled.

I quickly pulled the money out of my wallet and handed to him.

“No, sir! I’m gonna put these on as soon as I get in the car! Thank you so much! You saved me from having to buy a new pair of boots this season.”

I have been following his directive all day long. 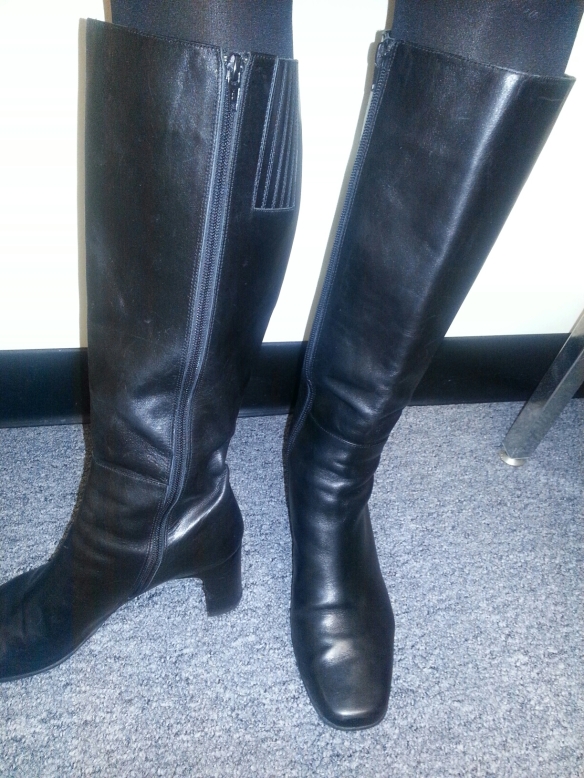